The Christmas holidays were fantastic fun, with plenty of food, wonderful company, and general good cheer all round. To ensure that we remain jolly for as long as possible, a few friends and we celebrate our very own holiday ("Fakemas") on January 2nd. It's basically all of the best parts of Christmas all over again, with a big emphasis on awesome presents. This year for Fakemas, I was very happy to receive the UltrAspire Impulse waist pack which was on my letter to Santa this holiday season.

There are three main ways to carry fluid and equipment around with you during an ultramarathon. The first is to use a handheld bottle, which has the benefit of being very minimalist but does not allow you to carry too much additional equipment. The second is to use a pack, which has the benefit of giving you scope for carrying additional gear but does mean you have the additional weight and the inconvenience of carrying something on your back. The third option is to use a waist pack, which sits somewhere in the middle as it allows you to carry more equipment but leaves your back unencumbered, preventing overheating and reducing potential chafe points.

Until now I have never found a waist pack that I liked the look of, since typically they seem quite bulky compared to the very well designed ergonomics of the Salomon S-Lab hydration vest that I normally use. The Impulse on the other hand is very minimal (at only 232 g), consisting essentially of two bottle pouches and a belt with a couple of pockets.

Despite the minimal nature of the pack, it is incredibly well designed with a huge number of nooks and crannies for storing all of the equipment that you are likely to need on a typical long run. Firstly, the two bottle pouches are separate entities connected by a lightweight metal clip, allowing independent movement while you run. This means that the whole pack does not move up and down as you run due to the rolling of your hips, and you can have the pack pulled quite tight to prevent any unwanted movement. The bottle pouches keep their shape, so there is no worry of the pouch collapsing when you take the bottle out, so putting the bottles back while running is easy to do without breaking stride. There is also a small hole in the bottom to allow any overflow to run off.

Rather than a clip to hold things together at the front, the pack is held in place by a very robust but lightweight metal buckle that connects slightly off to the side behind the slightly more padded pocket on the left. This keeps an even pressure across the belly and waist and means that the pack can be kept tight if required without worrying that the connection will ping open under the strain (something that has happened to me in the past with plastic clips).

The fit can be easily adjusted, and a quite neat little feature is that the excess belt can be tucked behind the main pocket on the right hip so that there is nothing flapping about as you run. Whilst flapping straps are not exactly a huge problem, over a long period of time they can really start to grate. To be fair, I will trim the excess off anyway, but it is a very streamlined design.

The pack comes supplied with two UltrAspire 0.6 L Human water bottles. These bottles have a finger loop for easy access when reaching behind you (saves on yoga classes), have an ergonomic 'angled' design to allow drinking easier, and have a simple top which allows access to fluids by either twisting or pulling the mouth-piece. The bottles are very good, and I typically use a similar bottle in the UltrAspire Isomeric Pocket handheld which I absolutely love. The problem here however is that they are a little too big. Over shorter distances (less than 20 miles) it's not really noticeable, but over longer distances I could really feel the tops of the bottles digging into my kidneys. I returned from a 35 mile run last week feeling slightly sore, and this is definitely not something that I would want to have to contend with for a full 100 miler. It is a real shame as the finger-loops really do work brilliantly at accessing fluid on the run, but I have found that using a smaller bottle (such as my trusty and cheap High5 0.5 L stubby bottles) prevents the problem. But despite the loss of the functionality of the finger loops, the design of the bottle pouches still makes access to the bottles very easy on the move as they are stored at an angle away from the body, preventing the need for complex contortions.

Despite the minimal appearance of the pack, there is plenty of storage space for anything that you might need on a long run. Firstly, there is a large zipped pocket on the right hip which is easily large enough to hold an iPhone, with plenty of space for additional supplies (some gels, a pack of tissues, car keys, etc.). The zip has an easy to grasp toggle which makes accessing things very simple while running, even with frozen hands (as I found this morning).

On the left hip, there is a smaller pocket that is large enough to fit 2-3 gels and is easily accessible while running. If you are racing and there are plenty of checkpoints then this would probably be fine, and for training runs it is more than enough. But if you are doing something long and unsupported you would probably need to use some of the other pockets to store additional gels. It is also unlikely that you would be able to fit in much in the way of real food (sandwiches, flapjacks, etc.) if that is your preference.

On each of the bottle pouches, there is a mesh pocket on the outside that can hold various bits. You could easily fit a few more gels in here, but I found it a useful place to store my emergency supplies such as a pack of blister plasters, some anti-chaffing cream and some Elete electrolyte solution. These pouches are a little more difficult to access on the move so I would say that using them for lesser used emergency bits is probably preferable. 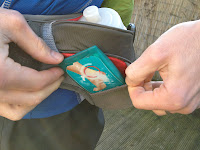 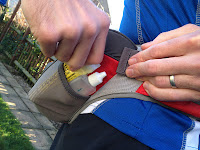 And finally, there is a very basic but functional (and of course lightweight) shock-cord on the rear of the pack for storing a waterproof jacket. This easily holds the jacket in place as you run, and there was no issue with the jacket falling out. This was something that I was a little worried about, as I have had "slippage" issues when storing my jacket in the loop at the base of the Salomon 5L pack (usually when the pack is empty and there is nothing to compress it in place). But pulling the cord tight seemed to keep things more than secure and I can't see this being a problem. I also found a useful way of storing my headtorch when the sun comes up (without having to use up valuable pocket space) by looping the strap around the waterproof.

Overall, I really like this pack. I made sure to completely fill it when I tested it to make sure that I got a feel for the comfort of it under race-type conditions. Even with both bottles full, a waterproof, and all of the various pockets filled up, I didn't really notice too much that it was there. Maybe I'm just used to carrying a lot of junk in my trunk? Who knows. The maximum I have run with it fully laden so far is 35 miles, but it was perfectly comfortable and I didn't really think about it at all. It is difficult to know if running a 100 miler with this pack would show any problems that I do not notice on shorter runs, but the potential for niggles certainly seems minimal based on my experiences so far. Of course, this is the pack favoured by Karl Meltzer for 100 milers, and hell - he seems to do okay with it!

I did find the issue with the bottles pushing into my kidneys to be a bit of a problem on longer runs however, but using slightly smaller bottles alleviated this issue. Since the smaller bottles are my normal go-to bottles, I probably would have switched these in anyway (to cut down on the weight), so I'm not too disappointed, but it's something to bear in mind if you are looking at this for yourself. I would be interested to know if anybody else has suffered from this issue, or if anybody has any suggestions to avoid it, so please do get in touch.

This is a fantastic pack, and its minimalist appearance belies its functional utility. There are some very clever design choices that have resulted in a very comfortable alternative to a small back pack. This pack would be ideal on longer training runs that don't require too much in the way of self-sufficiency (you won't be able to pack your sandwiches in there, but if you can run 50 miles on a few gels and a liter of water you will be laughing), or for a longer race that is well supported but requires you to take a little bit of kit with you.

The big question for me is; would I use this in place of my trusty 5 L Salomon pack? They are very similar in what they allow you to carry (minimum kit for most 100 milers not in the mountains, some gels, some emergency supplies, and a couple of bottles), and they are both well designed in the way that they fit as you run. The benefit that this pack has is that it only sits on your waist, so will prevent  the overheating associated with carrying a pack (even a lightweight one). The honest answer is; maybe. But without trying it out on a very long run I can't be sure how it will do over the distance. I can't see any additional problems arising over time that I haven't already foreseen, but who knows? I might give it a whirl at the North Downs Way as a bit of a test and see how I go.