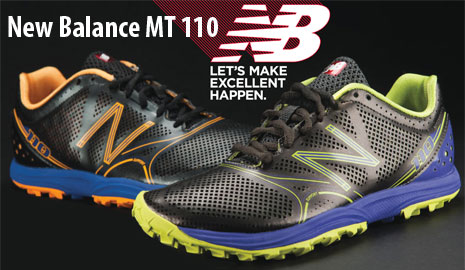 The New Balance (NB) Minimus Trail 110 (MT110s) have been around for a while now, having been released at the start of 2012 to general critical acclaim. The Minimus are a popular series of lightweight minimalist shoes from NB that have generally received rave reviews, and the trail series (the MT100 and the MT101) have been developed closely with Anton Krupicka and Erik and Kyle Skaggs, three of the top ultrarunners in the US. I really liked the sound of these when I first heard about them as the minimal drop from the heel to the toe plays to my forefoot running style, and when I finally found that they were available here in the UK for the low low price of £30, I just had to grab a pair.

I have been using these regularly for over 6 months now, and have probably run over 600 miles in them, usually on groomed trails but also with the occasional run through incredibly sloppy mud, knee deep in river water, or on rocky hilly terrain in Wales. Also, they work surprisingly well on road.

It's probably a bit late in the day to be writing this review, but I have just purchased a pair of Salomon Sense Mantras which I am in the process of putting through their paces and they will inevitably get compared to these. 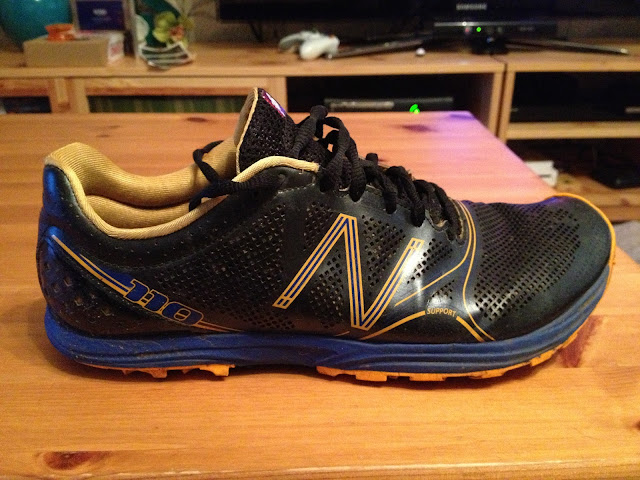 The shoe lies somewhere between a truly minimalist shoe like the Vibram Five Fingers and a normal trail shoe. There is a minimal 4 mm drop from the heel (18 mm) to the toe (14 mm) promoting a mid-to-forefoot strike, but whilst there is not much in the way of cushioning there is certainly more than you might expect to find in a more minimal shoe. These shoes are also  incredibly lightweight, at only 219g (UK size 10).

Blue and orange aren't typically seen as matching colours, but I really like the look of these shoes; they're eye catching without being too ostentatious.

The upper consists of a perforated synthetic material which seems to be well-ventilated, lined with a very comfortable material designed for sockless running. Whilst this allows water into the shoe, it also clears water very quickly which is very important in a long-distance trail shoe. I typically combine this shoe with the Drymax Lite Trail sock which works well at keeping my feet dry, even after running through flood water when the river that I often run along bursts its banks. 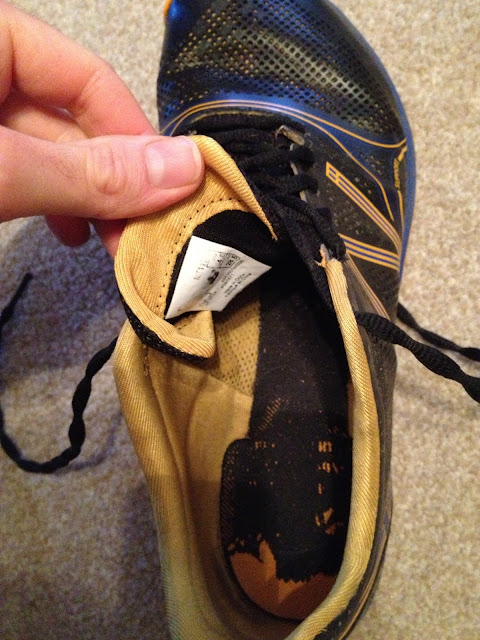 When you slip these babies on, it really is like putting on a pair of slippers. The shoe is designed to be comfortable when worn with no socks, as there is also no insert and the seams within the inner lining are designed to prevent irritation. The sizing is slightly small, so I went up a half size from my normal shoe size to account for this. The toe box is designed to be wider to allow natural splaying of the toes upon toe-off, while the rest of the shoe fits quite snuggly. Despite the wide toe box, I found that when I wore these with no socks, I developed a hotspot on the outside of my little toes. But this may be more a problem with my slightly dodgy feet than with the shoes though.

The lacing system is standard (so no quick lace system like with Salomon shoes or Hoka One Ones), although the laces are designed to hold in place. I have found that if the lacing was not set correctly on the midfoot, then this led to the onset of tightness on long runs of 20 miles or more. But once the laces have been set, you don't need to worry about them again. I just slip them on, tie them up, and they're fine now.

As I said, this shoe isn't quite a minimalist shoe. But whilst the sole contains more cushioning than for many truly minimalist shoes, there is certainly improved proprioception on the trails, and the Rock- Stop rock plate between the forefoot and midsole provides protection from pointy things. But with improved feel for the terrain comes increased soreness on very long and rocky terrain. For longer or more technical ultras, I have to say that I wouldn't want anything less than the protection offered in this shoe. 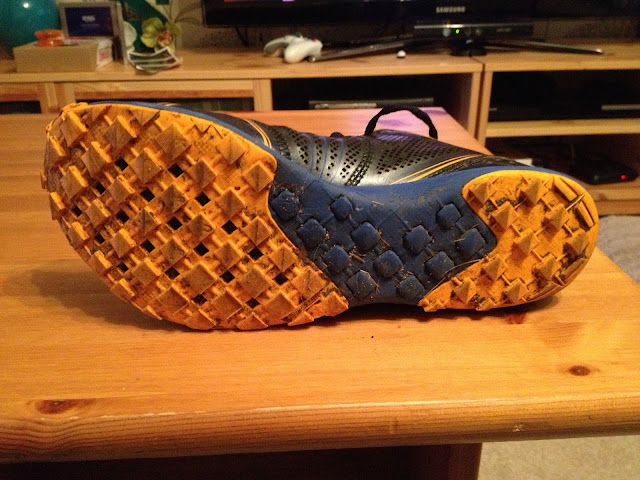 The tread on the out-sole is designed with a pretty aggressive set of lugs that seem to work surprisingly well on all kinds of terrain. Having said that, when I took these shoes to the OMM training camp I found that they were not as grippy on very wet rocks as the larger lugs on my Salomon Speedcross 3s. However, for the sorts of conditions that you will find on most normal non-mountain races they should cope quite well, but I'm not sure that I would want to take them on UTMB. The midsole is made of a softer flexible foam, allowing for more flexibility and also shock absorption. I particularly like the "KEEP UP" stencilled into the forefoot.

There's no doubt that the amount of shoe you get for your money here is beyond question. I picked mine up for 30 quid, which is anywhere from half to a quarter of the price of other similar shoes.

I have found that running with a more forefoot strike pattern works well for me over longer distances, and have had no overuse injuries since adopting this running style (touch wood...). However, I like to have a little bit of protection when running for long distances with rocky terrain, so have no wish to start running barefoot. These shoes sit somewhere in the middle, allowing me to concentrate on my running form whilst providing enough protection from the terrain.

These are certainly about as minimal as I would go, as even the MT110s can be pretty unforgiving if you do not maintain good form. I found this to my detriment at the end of last year at the Portsmouth Coastal Marathon. At about mile 8, my foot slipped and got jammed in a set of wooden steps and crushed the top of my foot (there is not much protection in the upper). This completely messed up my gait as I couldn't put any weight on my forefoot, meaning that I had to run the rest of the race with a midfoot to heel strike on my left foot. For a few weeks afterwards, my left calf was completely screwed and I was unable to run. The important lesson from this is that these shoes are great when you're running with good form, but if your form drops then there is nowhere to hide!

I absolutely love these shoes, and really enjoy going for runs in them. It just feels free and easy, and I really like the feeling of running with minimal equipment (give me a pair of MT110s, a bottle, and a pair of shorts and I'm good!). But I'm not sure that these really work for me as a racing shoe over longer distances. Given the price, I would love to be able to make these my shoe of choice, and Anton Krupicka has called them the best trail shoe he has ever run in. But for me, I still need a bit of extra cushioning for when things go wrong.

I tend to run up to 30 mile runs in these, but I don't think that I would do anything longer for the time being. They work great at training my legs to run properly and maintain good form, but when racing a 100 miler it is inevitable that form will drop. My usual shoe, the Salomon Speedcross, works very well for 100 milers as it is a good all round shoe. I am hoping that my new pair of Mantras will fill the gap between the two, giving me the benefits of cushioning from the Speedcross with the lower drop to help me maintain good running form throughout the race. Time will tell!
Posted by Sam Robson at 19:44