The past few weeks since the Grafham Water marathon have been a bit of a bust in terms of training. I have just about managed to squeeze about 20 miles in, but other than that it has been a run free zone. In my defence, this is due to my recent nuptuals. Yes, I am now a married man (sorry girls...). And how are we spending our first weekend together as man and wife? Well I've buggered off up to Loch Ness, and Jen's getting drunk with her friends! Ah, marriage!

Dan Park, Pete Lefort and I woke up on Saturday bright and early, ready to hit the road at 5am. We were expecting a good 9 or so hours drive up to Inverness, so Dan and I shared the driving, with Pete being in charge of the games of I Spy.

When the sun came up it was clear it was going to be another beautiful day - in fact, it ended up being the hottest day in October for a very long time. Well, in Cambridge at least. As soon as we hit Scotland, the heavens opened and the world turned dark and dank. We spent the day getting very wet, and eating our lunch in the rain. By all accounts, a perfectly typical summer's day out in Scotland...

Dan and Pete sightseeing in Scotland.

This is my last marathon this year, so following on from my last performance, I decided to have a crack at beating my PB. The winning time last year was 2:20, so if I can just shave an hour off of my time...

Given the sheer number of water points, I decided to have a crack at running without my trusty hydration pack. I picked up an arm band to stick a couple of gels in, but other than that planned on going out unencumbered. That should cut off half an hour or so... A friend suggested losing the side burns would gain me another half hour, but I think that's going too far!

Sunday morning came, and the elements looked favourable. We got kitted up, and headed out to find Nessie. I can't help but think that the age of high definition photography has really put a damper on the field of Cryptozoology (the study of animals that DON'T EXIST), but I had my iPhone with me just in case!

We turned up at the start and were herded across the wet grass towards a number of buses waiting to take us up to the marathon start point. Starting out with soaking wet feet was not ideal... This was a point to point course from the highlands of Fort Augustus, running along the length of the Loch, and ending in Inverness town center. The race profile (which you can download here) looked to be pretty favourable with a general downhill slant, although a recent review in Men's Running magazine pointed out to me by my dad suggested it was anything but easy. How difficult could it be though?

By the time we reached the start line, the rain had started up again, and fog had rolled in making visibility incredibly poor. How annoying! "Come to Loch Ness", they said. "See the beautiful sights", they said. I could barely see the people in front of me! The start was signaled by a marching band, and we were off!

As we left Fort Augustus, it quickly became clear that the race profile doesn't quite do the terrain justice. It was all along roads, but they were very undulating. My strategy was to hold my pace on the uphills and utilise the downhills to make up for lost time. This actually worked well for me for the first half of the race, and I even managed to set a new (unofficial) half marathon PB. But by the time we got to the second half, the hills were starting to catch up with me. Despite the fact that there was little elevation change in this portion of the course, the uphills seemed to go on forever and the downhills never quite made up for it. At mile 18, we hit the hill that you can see as a small blip on the right hand side of the profile. What we actually found was a relentless incline stretching on for over 4 miles. By this point, I had resigned myself to not beating my previous time, and I had wrecked myself in the first half of the race. Not the best mindset to be in, but I pushed through.

By the time we got into Inverness, I was back at a reasonable pace, pushing the last 2 miles for a strong finish of 3:23:28, coming in 199th out of around 4,000 runners. I suspect that, had I not been pushing so hard for a sub 3:10 time at the start, I would have had more left in me for the last half and may have finished quicker, but I'm happy with my time given the course. This was definitely not the most ideal course for a PB, especially after two weeks of poor training and celebrations. However, I feel pretty confident from my performance that I could hold my pace for a sub 3:10 finish on a flatter, faster course (perhaps with slightly better weather conditions). But we'll see. Who knows, with a bit of proper training, I may even have a sub 3 hour marathon in me one day. The winner this year was Tomas Abyu, who completed the course in 2:20:50, which is utterly astounding to me. The ability of the elite runners absolutely amazes me, and I couldn't even dream of running anywhere close to that! 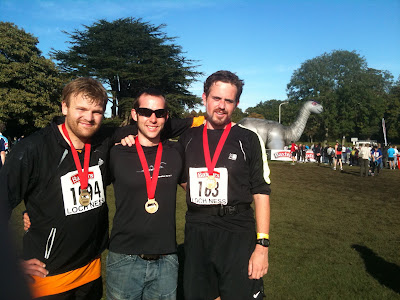 Blue skies in Scotland - harder to spot than Nessie!

The sun was finally out by this point, and I made my way back to the finish to cheer the other runners through the line. Pete and Dan both came through soon after with fantastic times. Dan took me completely by surprise, shaving 20 minutes off of his time from Grafham two weeks ago and sprinting through the line in 4:35 (with the announcer shouting "this is how to complete a marathon!"). For Pete, this was his first ever marathon, and despite an ankle injury a few weeks ago, he came through the line in an amazing time of 4:44.

All in all, it was a lovely race, really well organised, and the scenery (once we could see it) was indeed stunning. It was a bit of a trek to get there, but we all had a fantastic time. Next up is the Great Eastern Run half marathon next week - hopefully I should be able to push for a new PB this year and maybe even break 90 minutes, but we'll see.

Enjoy the last remnants of summer! 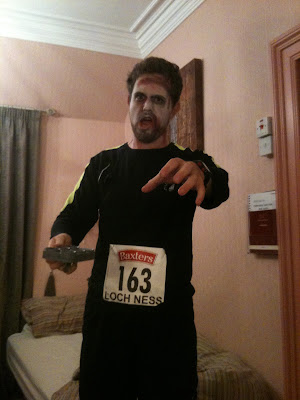 Now where did I leave that chainsaw?!
Posted by Sam Robson at 13:13