Huh. So that's what it feels like to win a race! Oops, sorry. Spoiler alert... 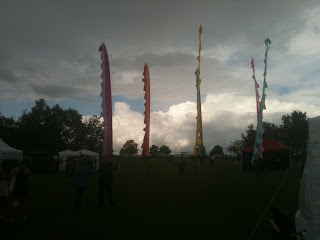 This weekend I was supposed to be running the High Peaks 40 ultramarathon in Buxton in the Peak District, followed by a local marathon at Grafham Water reservoir, a local dog-walking, cycling and running haunt of mine. This was obviously set to be a pretty hardcore weekend, giving me my third finish in the RunFurther ultra marathon series, and only my second ever marathon finishing time.

However, next weekend I'm getting married to my wonderful (and incredibly understanding...) fiancée Jen, and apparently having me limping around the dance-floor doesn't quite fit into her idea of the perfect wedding. I therefore decided to forego the HP40 and instead stick to "just running the marathon" on Sunday. It still never sits quite right with me that I can use that phrase. Unfortunately this means that I will not have enough finishes to get an official RunFurther score for this year, but there's always next year. Maybe by that point I will have learnt how to read a map...

Grafham Water actually has a special place in my heart, as it was here that I ran my first ever marathon last year. The main route around the reservoir is roughly 8-9 miles long, and whilst it is by no means hilly it is at least a bit more undulating than many other places in the Cambridgeshire area. I turned up here last year with the intention of running around the whole loop. After finishing, I decided why not go for a second lap? And when I finished that lap, I figured that it would be rude to not do another lap and complete the full marathon. I managed my first ever (unofficial) marathon in just under 4 hours.

I turned up this morning hoping to better this, and cream my current PB from London of 3:47:45. Since London was followed by a 90 mile warm-down run, I was pretty confident that I could beat this... The Grafham Water Marathon is a new marathon, organised in conjunction with Amantani, a charity who work to build boarding houses to help care for and educate children in Peru. There was an obvious Latin-American theme to proceedings, with ponchos for sale, bottles of Inca Cola (my new favourite soft drink!), and even a herd of alpacas to keep the kiddies entertained. 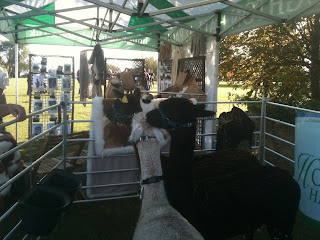 The course itself was a 13.1 mile loop over a combination of trails, paths, and fields, taking in most of the reservoir and extending out into some of the local countryside. Half-marathon and marathon runners all started at the same time, with the two splitting off at the finish of the first loop. My race plan was pretty simple: I was going to aim for a speedy start to get towards the front of the pack to avoid getting caught in choke points, then settle into a steady pace through the rest of the race. When the race started, I made my way through the 250 or so runners to get into a nice open position, and settled into my pace. I wasn't sure how much of an effect the undulating terrain was going to have, but since I had run the Long Tour of Bradwell in the Peak District last month and coped well with some real hills, I decided to just go for it and not hold anything back. I opened up on the short downhills to make up time, kept a nice steady rhythm through the flats, and kept the pace for what little uphills there were.

The race itself was relatively uneventful. I gradually made my way through the rankings, overtaking people fairly regularly and steadily pushing forwards. The weather was pretty much perfect for running. Overcast but dry, which given the previous night's torrential rain was a blessing! Everybody seemed to having a great day, and there were a lot of other people out and about enjoying the morning. I was quite pleased to see that that most people that I ran past returned my cheerful "hello", including the other runners.

When I got to mile 12, I could only see a few people up ahead, so I was quite impressed with how I was going. As I ran past the checkpoint, one of the marshals shouted "only a mile to go mate"! I pointed out that that wasn't quite right, but thanks anyway! The last mile of the loop is along the reservoir wall, and is a perfect time to really open out. However, I kept things sensible, not wanting to get drawn into one of the half-marathon runner's sprint finishes! I caught up with another marathon runner and nearly ended up in a sprint "finish" with him, until we both agreed it would probably be a bit silly! 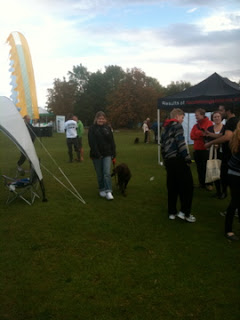 I pulled ahead and came into the home stretch, taking the diversion for marathon runners and heading off into my second lap. I was a little conscious of the runner I had just passed, and really didn't want to risk getting into a head-to-head at this stage. I decided to up the pace and pull ahead as much as possible to get myself out of sight (and hopefully out of mind), and try and get a little closer to the runners ahead of me.

As it happens, this was unnecessary. At about a third of the way around the second lap, I heard the unexpected shout from one of the spectators that I was in the lead! Suddenly I was winning the whole bloomin' race. Yikes! I felt good with my pace (which was a little slower than I would have liked due to the slightly muddy terrain), so just kept pushing. A lot of people, particularly families, were walking the half marathon course, and I started to pass some of them. They were all incredibly supportive, moving aside and cheering as I went past.

Despite wanting to concentrate on my own race, I couldn't help the occasional glance behind me, and could just make out the runner I had passed behind me. I really didn't want it to turn into a 6 mile sprint to the finish, so I pushed on a little faster to try and open the gap. By mile 22, I was starting to feel a little tired, but I think that this was mostly in my head. My legs felt great, but I had that niggling voice in the back of my head telling me how nice it would be to stop and have a little walk. But considering what I am like normally at complaining that I could have done better, I couldn't contemplate how difficult I would be to live with if I let my first ever first place trophy slip through my fingers. Suck it up Sam, for Jen's sake!

So I pushed on, through the fields and out onto the final section of the race. This time, there WAS only a mile to go, and I knew it. I kicked things up another gear, pushing to close to 6 mins per mile for the last mile along the reservoir. Head down; push through; one foot in front of the other; oh, there's Jen! I looked up to see Jen standing by the side of the path with our dog Max. She had come along to cheer me on and had assumed she had plenty of time to get to the finish line, but had been a little taken aback by my sudden appearance. With a final burst of adrenalin from Jen's cheering, I approached the finish for the second time, coming through the line in a time of 3:18:50. A new PB, and my first ever first place position. Very exciting! 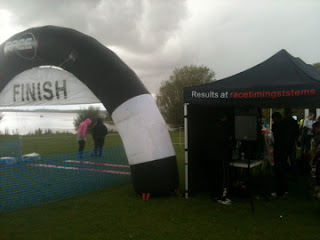 Being my usual self, I was straight into chatty mode, thanking the marshals and helpers, and having a chat to one of the race directors, Chris, about how the day had gone. I had the usual comments of "you look like you could go again", and when I mentioned my penchant for ultras some of the people (particularly the St. John's Ambulance members at the finish) were a little surprised; "Sorry... over 100 miles in one go??!!". The second place runner, Dennis Martin, came through the line a few minutes later in 3:20:46! In some ways, I am glad that I kept ahead of Dennis, but it would have been a hell of a run into the finish between us if it had come down to it! Third place went to Denys Baudry in 3:33:08.

A few quick photos and a bit of stretching later, and I was back to the finish to cheer the rest of the runners through. Everybody had a big smile on their face as they went through the line, and almost everybody had a really strong finish through the line to the sounds of the Peruvian band.

The organisation of this race was fantastic. Everybody who helped out at the checkpoints was smiling and very encouraging, the trail was very well marked out (it's nice to not get lost for once...), the start/finish was really professionally laid out, and the timing system from Race Timing Systems worked brilliantly, allowing you to see your time as soon as you crossed the line. Hopefully next year the race can be even bigger, and attract some more marathon runners from around the country. 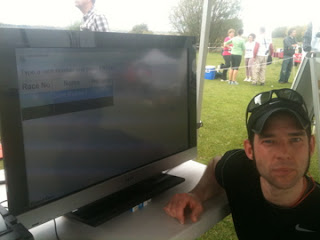 I only really had two negative comments, and these were very minor. Firstly, one of the checkpoints had run out of water when I got there, but apparently this was sorted very quickly for the runners behind me (communication between the marshals and organisers was incredibly efficient), and since I had my hydration pack it wasn't a problem for me. Secondly, I was a bit disappointed that there was no prize for first place - I don't expect this to happen ever again (let's be honest, 3:18:50 isn't often going to get me anywhere near the podium), so it would have been nice to have something to remember it by! Oh well, it's not all about trophies, and it was all for a good cause. All in all, it was a cracking day. The two RDs, Chris Palfreyman and Fred Branson, were really friendly and I talked their ears off for a while afterwards, discussing the virtues of trail running and ultras!

This was also a landmark day for my friend Dan Park, who ran this as his first ever marathon, completing in 4:55:20. Dan was one of my crew members when running London to St. Ives, and he is now doing his own fundraising event, running 3 marathons, a half marathon, and his first ultra marathon in the Brecon Beacons in November, all to raise money for St. Wilfrid's Hospice. If you have ever had a loved one suffering from a terminal illness, you will know the comfort that the wonderful people at places such as St Wilfrid's can bring. Please show your support by sponsoring him. 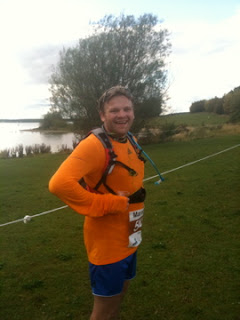 Now for a brief rest while I tie the knot with my wonderful wifey to be, and then it's off to Loch Ness the following week to run the Baxter Loch Ness Marathon with Dan and Pete Lefort. Pete, never one to do things normally, will be running Loch Ness dressed as a zombie to raise money for People and Planet, a student-run charity who work to stand up for human rights and for campaign for environmental causes. If you're a fan of people, the planet, or zombies, please sponsor him!