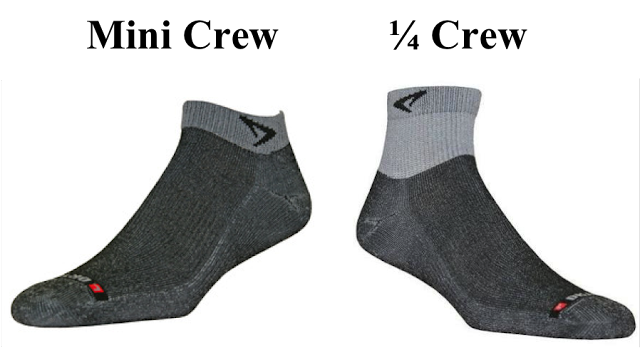 When running for long distances there are many factors that can make the difference between a relatively comfortable experience, and an agonizing slog with the end nowhere in sight. Amongst the most obvious of these is the state of your feet, and for many people blisters can quickly put an end to what was once a fun experience. Blisters are typically due to a combination of excessive friction and a build up of moisture - two things that are only going to get worse if you are running a 100 miler. On my first 100 mile race last year, I got a hotspot on my forefoot within the first 10 miles and did nothing about it. Running over 90 miles on a gradually worsening blister is not much fun, and by the time I had finished it looked (and felt) pretty bad! However, with the correct choice of footwear it is possible to alleviate the causes of blisters and ensure that you have no excuses but to push on to the finish line!

As the main point of contact with your feet, choosing the right kind of socks can make a huge difference to your comfort while running. A cheap pair of Asda cotton socks might be fine for a quick jog around the block, but they probably won't last you long on the fells. There are several main types available to you, and as usual a lot of it will come down to what works best for you personally. I would love to give the foot-glove socks like Injinji and Wigwam a go (which have individual compartments for each of your little toesie woesies), but I am unfortunately a genetic freak with slightly webbed toes. I am hoping like hell that my daughter is born with Jen's perfect feet instead of my misshapen hooves! My good friend Dan Park has written a great comparison of the two from the point of view of a runner with normal feet here.

Until fairly recently, my sock of choice was the 1000 Mile Fusion sock, a twin layer sock designed in such a way that friction is reduced by allowing the dual layers of the sock to rub against one another. These have worked well for me over the years, but my main issue with them is that they are quite bulky, soak up moisture over long distances, and it is very easy for them to become rucked up inside your shoe which can lead to exactly the problems they purport to solve. These problems are particularly exacerbated on hilly terrain, as I discovered this year at the Lakeland 100.

As I have started to run more, I have found that I prefer to run as unencumbered as possible. With this in mind, I briefly entertained the idea of foregoing socks entirely by running in shoes such as the New Balance Minimus Trail 110s or the Salomon S-Lab Sense (drool...), which are designed with an inner liner to make them comfortable to wear sockless. However, I found that this led to rubbing on my little toe in the MT110s, so decided to look for a relatively minimal sock.

I have heard great things over the years about Drymax socks, but they were only available in the US and seemed to be quite difficult to get hold of. However, when Keith from the Ultramarathon Running Store announced that he was going to begin to stock them, I figured it would be a great time to try something new. Of the vast choice on offer, I decided in the end to go for the Drymax Lite Trail sock, firstly to go with my more minimal sensibilities, but also because I'm a stingy bugger!

Up until now, my usual pre race ritual for my feet was to apply large amounts of lubrication, put on my twin skin socks, rearrange the socks to make sure that the layers were not rucked up, put on my shoes, take off my shoes to rearrange the sock as it didn't feel quite right, put on my shoes, walk around, realise there was another fold in the socks somewhere, take off my shoes,... I found that I could never quite get 100 % comfortable in them. The beauty of the Drymax Lite socks is that there is so little to them that there is no extra material to worry about. They sit quite snuggly around the mid foot due to their arch band, and in particular they hug the heal rather nicely due to the "Y" shaped heel stitching.  There are no seams on the inside of the sock, so there are no points of contact that can become an annoyance late into a long race. The sock has been designed around multiple 3D foot models to ensure a perfect fit.

Drymax socks are designed with a dual layer system (not to be confused with the double layer design of the 1000 Mile socks - it's still one single liner) in such a way that the hydrophobic (does not attract water) inner surface moves moisture from the feet and feeds it to the outer absorbent surface. Because the inner surface is non-polar (non-charged), it does not hold any water and so your foot remains dry. This is different to the effect of wicking fibers (such as Tactel®, used in 1000 Mile Fusion socks) which are hydrophilic due to their polar properties, and so attract water and "suck it up" from your feet through capillary action. However the problem with wicking in socks is that the sock gets wet as it soaks up the moisture. Evaporation is expected to clear the water away so that it can continue soaking sweat up, but evaporation inside a sweaty, smelly, warm and humid shoe is much slower than the rate of sweat accumulation. Thus you end up running around in sopping wet socks, and eventually there is nowhere else for the water to go. The inner layer of the Drymax socks instead acts as a completely waterproof barrier between your feet and the moist outer layer. This was quite surprising to me, as I had always considered wicking fibers to be the way towards successful moisture control (and for t-shirts and things, where evaporation can occur more rapidly over a larger surface area, this is true). For a better explanation than I can manage, see here. There is also a hydrophobic double welt layer on the top of the foot, which repels water as you splish splash through the puddles.

All of this should theoretically keep your feet much dryer, and hence make them less prone to blistering. This prevents the need to apply gallons of lubricant to the feet before putting on the sock, and in fact lubrication is actively discouraged as it can prevent the inner layer from doing its job. There are no vents in the sock, which helps to prevent dirt and grit from getting in; irritants which can of course exacerbate the onset of blisters and hotspots during trail runs.

Upon trying the socks on, it is immediately clear how comfortable they are. They really do hug my foot, particularly around the midfoot and heel which are two places that I have had issues with socks not quite holding on tight enough in the past. Wearing them around on a few local trail runs, they were very comfortable and showed no movement whatsoever. Combined with the minimal drop NB MT110s, they are incredibly comfortable. The one concern that I had was whether or not they were too light, and how well they would cope with longer races and more extreme terrain than the local trails of Cambridgeshire.

However, I have now well and truly put them through their paces, having put 70+ miles a week on them for the last three months, and having used them on the 100km Norfolk Coastal Ultra, the illustrious Ultra Trail de Mont Blanc, the mud-fest at this year's Likeys Brecon Beacons Ultra and the 30+ hour suffer-fest that was last weekend's Piece of String Fun Run. These socks have been up and down mountains, through sand dunes, through driving rain, high winds, boggy ground above my ankles, and even at several points straight through the River Thames, and at all times my feet have come out of the other side completely unscathed.

It is the last race that is the most incredible to me. The Piece of String "Fun Run" took us through some of the worst underfoot conditions that I have ever encountered (and that includes UTMB). I was genuinely worried that I would end up with trench foot by the time I finished. I was terrified about what I would find when I finally scraped off the inch thick layer of mud from my shoes, peeled off the crud-encrusted socks, and saw what lay beneath. I now wish that I had taken a photo. What I saw was a foot that was very white and wrinkly, but amazingly free of mud and surprisingly dry considering where it had been. By the time I had had a couple of hours sleep, my feet were back to their usual (admittedly horrific-looking) selves, with one small blister to show for my troubles. And this blister occurred between my two webbed toes (told you they were horrific) which always rub together due to their close proximity - nothing any sock could do about that.

As a final test, I decided to perform a scientifically rigorous comparison (ahem...) of the waterproof properties of the Drymax Lite Mini Crew Trail sock as compared to the 1000 Mile Fusion sock. In both cases, the socks have been previously put through their paces (in fact these Drymax socks are the same ones that I wore at the Piece of String Fun Run). For both, I first submerged my feet in water for 30 seconds, then carefully removed the sock and quickly pressed my foot on a piece of kitchen towel to see how much water had made it to my foot. All photos were taken by my beautiful assistant (and wife) Jen. The results were really quite startling:

I also performed a test looking at the water-repellant nature of the respective fibres. I simply turned the sock inside out and ran it under the tap:

For me, these socks are perfect. They are lightweight but with enough padding to handle even the gnarliest of terrain, they are inexpensive at less than a tenner a pop, they keep out the crap of the trails, and they keep my feet incredibly dry. These are now my sock of choice, and I can't see myself changing that any time soon. I commented to Keith at the start of the Piece of String that I wondered if the thinner Lite version would be enough for such a long race, but now having finished I don't think that I need to use anything more. But if you want to get something with a bit more padding, the Drymax Maximum Protection Trail sock may give you the underfoot protection that you need.

Note: I purchased these socks myself based on recommendations from fellow runners. These opinions represent my unbiased view based on my own personal experiences.
Posted by Sam Robson at 09:29