Training for the run has been comparatively easy when compared to organising a fund-raising gig. Running I can do. It's juts putting one leg in front of the other over and over again. Organisation? Now that's a real challenge! I arranged this little soiree to boost donations, promote the charity, and get the word out about the run in April. Being a drummer myself, I have been in many gigs over the years. But being a drummer, my job is usually to turn up, keep my mouth shut, and hit things in something approximating "time". I'm very good at turning up at least... But never have I been involved in the ins and outs of setting up and organising a gig. Still, there's a first time for everything!

Arranging the details was actually much easier than I had feared, helped a lot by the fantastic response that I got from the people that I contacted. First of all, we were offered the music room at the Portland Arms in Cambridge for free by the owners Hayley and Steve, and the bands that I contacted were very quick in showing their support. I was worried that I would need to use my charm to sway them into playing, so who knows what I would have done if that had happened! I was incredibly pleased with the line-up that I was able to put together, with three big local acts and a band from back in my University town of Leamington Spa featuring the brass section from my old band; Stupid, Stupid, Stupid and Steve. All in all it was a nicely eclectic mix, with (if you'll pardon the cliche) something for everyone. 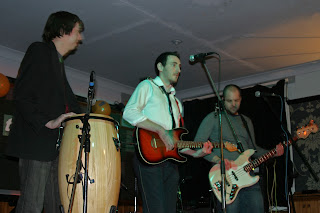 The night was kicked off in style by Cambridge-based singer and song-writer Aidy playing a semi-acoustic set with his backing group. Aidy has written so many songs that it is difficult to pigeon hole him into any one genre. Last year he wrote, recorded, and released a song a week for the whole year, and they all have their own unique sound (check out his website to listen to all 53 of them, along with the rest of his extensive back catalogue!). I would say that he falls into the Indie/Alt-rock category, with a voice very similar to Billy Corgan (of Smashing Pumpkins fame). It was a great opening to the night, with songs like the haunting sounds of Not Your Day, and "love ballad" (I can only assume...) Washing Machine being particular favourites. 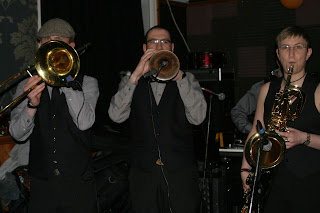 Following on from Aidy were The Titanics, a 9-piece funk and soul outfit hailing from my old haunting ground of Leamington Spa. I was really looking forward to seeing what my old band-mates Matt and Tim had been up to - and boy was I not disappointed! Coming to the stage in matching 20's speakeasy-era attire, the audience were treated to a three song opening segue that well and truly brought the promised Mighty Funk and Soul to the Portland Arms. With a 3-piece brass section, keyboard player, guitar, bass, drums, decks and singer, they were forced to spread out off of the stage to give themselves the room they needed to bring all of their energy to the performance! They played a combination of classics, bringing their own flavour to the whole experience, as well as one or two of their own songs. Singer, Ruth Taylor, owned the stage with an absolutely incredible voice, and the band were incredibly tight and clearly all having a lot of fun playing. 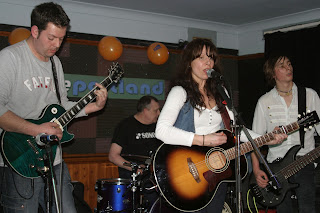 Next to take to the stage was Lexie Green, a Cambridge-based singer/songwriter who is incredibly well known in the area, and is a regular on BBC Radio Cambridge. She has an absolutely amazing voice, and her own brand of bluesy Americana (which she calls Tex-Lex) is a fantastic combination of catchy rock numbers and more vocal-led bluesy numbers. What's more, she is an absolutely lovely person, and kept the atmosphere fun and friendly, engaging with the audience throughout. I had been listening to her fantastic album, Twenty Ten (available on iTunes), all morning whilst out running and had Leave Me Sleep and Fast Cars and Big Guitars stuck in my head. Hearing them live did nothing to dislodge them, and I'm still humming them today! Lexie is currently in the running for the Best Female Vocals at the British Blues Awards, so please check out her music and vote for her! 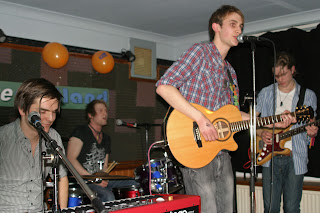 Headlining the event were local Cambridge-based Indie band Isaac's Aircraft, who are one of the top acts in the area at the moment, and are (I suspect) about to break out into the mainstream Indie scene. They are already making big waves on the scene. Their first single, Friends and Foes, went straight into the BBC Indie Top 30 when it was released, they have supported bands like the Zutons and Amy Winehouse, and they are currently sitting at number 1 in the People's Music Awards Indie/Rock vote (please vote for them if you haven't already!). Surprisingly this was their first time playing at the Portland Arms, and they took to the stage to a great reaction from the crowd. Lead singer Zak Thomas had a great rapport with the crowd, at one point jokingly describing himself as "Richard Ashcroft on acid" (isn't that just Richard Ashcroft?!). However, the tone of the band is much more upbeat than The Verve, with piano-fuelled tunes like Steady On and My Baby Did Me Wrong. They have a new album coming out in May, so keep your eyes open!

Overall the gig was a huge success. It was great to meet all of the bands - thanks to them the whole evening ran incredibly smoothly despite the potential logistical nightmares. The crowd was amazing and were genuinely supportive for my fundraising efforts, and overall we raised a total of £350 towards the Epilepsy Society! This puts me up to £1,580 in total, which is utterly astonishing, so thankyou so much to everybody that came along and supported me! I had a fantastic night, and I hope that everybody else did too. Now that the hard work of organising the gig is done, it's just the small matter of the run to go now...

Email ThisBlogThis!Share to TwitterShare to FacebookShare to Pinterest
Labels: London To Cambridge