I recently bit the bullet and purchased the Salomon XT Advanced Skin S-Lab hydration pack. For those not in the know, this is the latest hydration pack to be released by Salomon for fell running and ultra-marathon running, and has been designed by runners; for runners. It looks very good (much better than my little Camelpak, although there are some snazzier ones available): 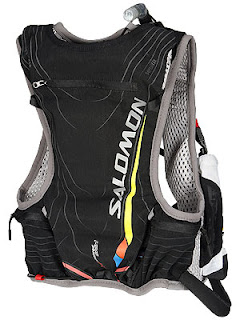 It is also pretty expensive (RRP £120) and up until recently has been pretty difficult to get hold of (they sold out almost straight away in America, and nowhere over here in merry old England were selling them). I finally located one at Beyond Extreme with the added bonus that it was actually reduced in price (http://shop.beyondextreme.co.uk/product_info.php?products_id=2426&osCsid=aee81115f3c0a26b5adf026c1d6c786f).

So what do you get for your money? Well, first of all, it is comfortable. Very comfortable. In fact I was amazed at exactly how comfortable it was. People have been raving about it since it's release last year, and I can see why. The straps are nicely adjustable without having straps flapping around everywhere, and the whole thing hugs you very nicely. I took it for an inaugural 30 mile run at the weekend with no rubbing on my shoulders (which I often suffer with) and, more importantly, the lack of movement resulted in no rubbed nipples (which I always suffer with!).

The hydration pack is a 1.5 L pack that is really well designed and easy to fill. The hose unclips from the pack making it easier to store in the fridge (or freezer apparently...) the night before, and the pack is isothermal so holds it's temperature. It was bloody freezing when I was out running, so I can't say whether this worked or not, but time will tell. The hose is nicely tucked away and comes up from the bottom of the pack, which I found much easier to access and then keep out of my way. There is also room for two bottles in the shoulder straps. I was worried these would get in the way of my arms, but this didn't seem to be a problem. Great for keeping a couple of carb drinks with you as well.

In terms of storage, I am still finding new spaces for storage! For such a small pack, there is a huge amount of nooks and crannies. I managed to take a few gels, some jelly beans, money, a spare pair of socks, my blister repair kit and some other medical supplies, and some anti-chafe cream just in case, and the pack was still nicely unimposing for running. There's even a space blanket included in there, and a whistle for in case you want to use it as an impromptu life jacket!

Okay, so it's obviously really well designed for its purpose. But I suppose the big question is; is it worth the money? Well it all depends on what your using it for. If you are using it for middle distances (say up to half marathons), I would say that you don't need to go quite this far when you can use a bottle belt or get a small pack for less than 30 quid. If you are regularly putting the miles in, and every way that you can come up with to prevent rubbing matters, this is invaluable. The fact that I didn't have to stop to lube myself up speaks volumes (although that may be more information than you really wanted...). So yes it's expensive, but I'm happy with mine.
Posted by Sam Robson at 09:09